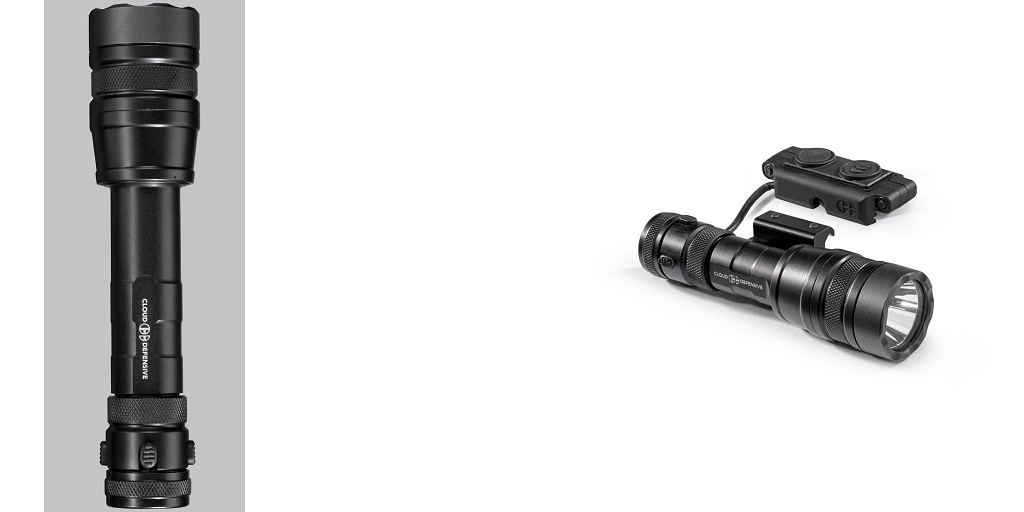 The majority of rail-mounted flashlights will offer you the flexibility to mount the tactical weapon light at either the 9 o’clock or 3 o’clock position. Most of these will also give you the ability to mount at 12 o’clock or 6 o’clock as well, should you choose to do so.

Out of the Way of Optics or Iron Sights
The first and most glaring advantage of an offset rail-mounted flashlight is that the light will lie out of the way of any optics or iron sights that are mounted to the top of the rail. Granted, you could also mount these in an offset configuration (as many do with iron sights) but it makes more sense to handle the weapon conventionally with the optics mounted above the rail. Then again, you have to do what works for you.

All the same, there is one more “but.” You can just mount the light at either the 9 o’clock or 3 o’clock position and that would solve the problem of interfering with the sight picture, right?

Slimming Down the Overall Profile
While the 9 o’clock and 3 o’clock positions do not obstruct the sight picture and are well out of the way of more optics, they do accomplish something else unintentional and potentially undesirable. They expand the overall width of the rifle.

Some shooters might not consider this a primary concern, but if you’re frequently in the habit of moving through close brush at night, you’ll want to work with the slimmest profile you can manage, and oftentimes offset mounts are tops for that.

While you can accomplish the same thing by mounting the flashlight slightly further back on the rail, you can also use offset mounts to move them further forward. The offset mounts will likely stagger the position of the light with respect to the muzzle (especially if it is ported), giving the light better protection against the accumulation of fouling.

You’ll still want to keep your light clear of the size of the muzzle, but some consider offset rail-mounted tactical lights at an advantage in this situation.

What Side Should You Mount a Rail Mounted Flashlight on?
The side you mount your weapon light on is another matter of concern to some shooters, and here’s what can be said about it. Whether you select an offset-capable weapon-mounted platform or choose to use an LED weapon light mounted right off the sides of the rail (9 or 3 o’clock) the side you choose to mount it on matters.

For right-handed shooters, mounting on the outside of the gun (the right side) prevents the light from hanging up on gear when you carry the rifle via a sling or close to your body. At the same time, carrying on the inside will help prevent the light from getting in the way or hanging up on external obstacles.

The choice is yours and any configuration can be serviceable; you just need to choose when works best for you, overall.

To learn more about these mounts, visit Cloud Defensive at the link above or contact them at [email protected]