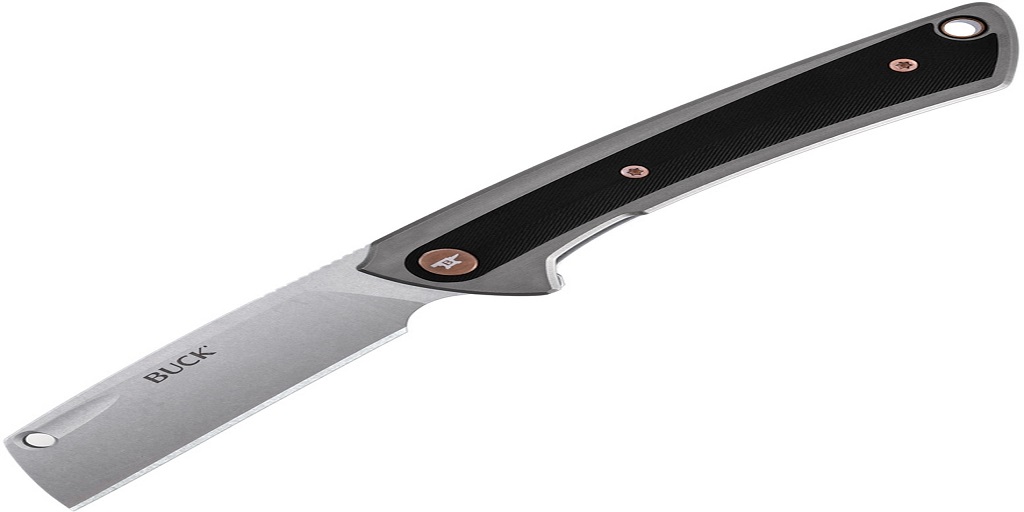 Alright, I can hear all of you collectively sigh and groan from here – the Selkirk is a Chinese-made Buck.

It is, and you’re right, and I have like twenty other American-made Bucks, including a 119, 2 110s, a Vanguard, 2 Buck Lites, a Compadre, a 113, and probably some others that I’m forgetting. The American-made Bucks are awesome tools and beautiful as well, but just hear me out.

The Selkirk, as a Buck survival knife, has a lot going for it. Let’s cover some of these details.

First, it uses the same 420HC steel used by the vast majority of Buck Knives. For a while, 420HC was Buck’s bread-and-butter. Only recently did they really start delving into 7Cr, 8Cr, D2, and other alloys.

I’ve read some complaints online about inconsistency in the heat treatment of the Chinese-made Bucks. I’ve even seen it in some of my own Bucks, and they have a point. Edge retention is sometimes inconsistent, but I can honestly say that it hasn’t been a problem with my Selkirk.

My Buck Selkirk might be an outlier – maybe the others are spotty – but it has a really hard edge that holds like a razor and hasn’t gone dull yet, with moderate yard work, carving, and batoning. It’s held up just fine. Also, since 420HC is naturally a pretty soft steel, I don’t think you’ll have a problem with this blade breaking. I could see this blade chipping or snapping, but you would really – and I mean really – have to try.

The design is also a really big bonus. Micarta handle scales and the corrosion resistance of the 420HC stainless steel blade go a long way. This, unlike your 1095 or D2 survival knife, is not going to rust.

Plus, the comfort and ergonomics of the scales are next to none. Buck could have machined them a little more to make them more tactile, but indexing is nearly perfect and there are no hot spots. It’s heavy, too, and you can just feel that this knife wants to get used. Buck has even squared off and flattened the pommel for use as a hammer, which is a nice feature that not many other survival knives have. You can use it as a nut-cracker or tent stake driver, and believe me – it’s effective.

I don’t love the jimping, because it’s pretty sharp and I don’t feel like it’s necessary on a bushcraft knife, but then again, I could see how your hands could be cold, wet, or greasy in the woods (even if you weren’t hunting) so maybe the extra angles are a bonus. It’s really a light ding as far as I care anyway.

The flat grind is a big bonus, too, as it’s great for carving, batoning, splitting, and other woodworking tasks. The vast majority of Buck knives are hollow ground, and this planning has been well-received, at least by me. The Selkirk gets high marks for this – it’s like OKC and ESEE knives that have similar sizes, weights, and grinds, but the Selkirk is a fraction of the price.

Also, the Selkirk fixed blade (it’s available in two sizes as well as in a folding configuration) comes with an awesome injection-molded nylon sheath and fire starter. Retention is superb, the nylon sheath is impervious to water damage and corrosion, and most importantly, can be configured for scout carry and a variety of MOLLE-carry methods. Those are multiple wins across the board.

Now, I’d also like to point out that even though the Selkirk (and company) is the only knife that Buck officially categorizes as a “survival knife,” it is far from the other option that would make a good one. The Compadre and Buck Lite models would both make a great Buck survival knife – and both of these are American-made.

Where Can You Get This Buck Survival Knife (and Others)?
So, in short, I’m a fan of this Buck survival knife, and I say that honestly. There are other knives in my collection that I like more (like the Compadre, actually, which is also a Buck) but they generally cost much more.

So, if you’re looking for a Buck survival knife that’s relatively affordable and far, far tougher and more utilitarian than the price tag would suggest, consider the Selkirk. You can pick one up online at White Mountain Knives (WhiteMountainKnives.com) for less than $70.