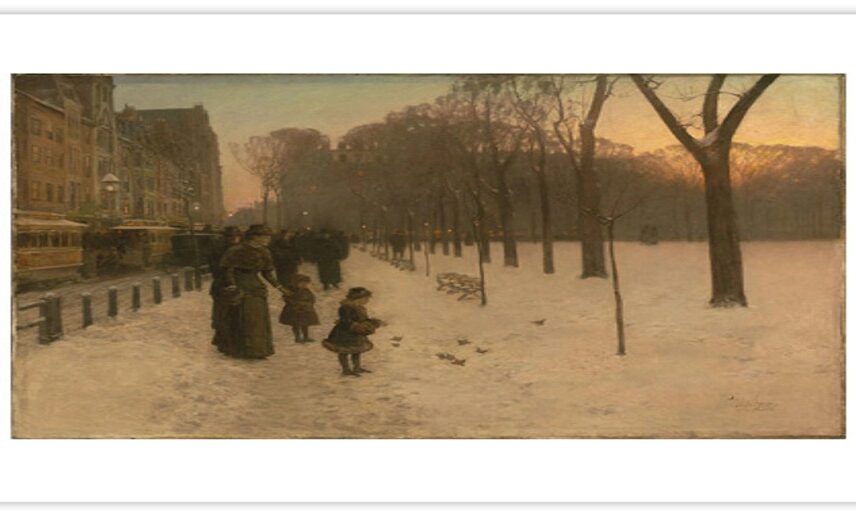 Frederick Childe Hassam was an influential American Impressionist painter who was active from the late 1800s through the early 1900s, until his death in 1935. He produced over 3,000 pieces during his lifetime, his urban and coastal scenes among his most famous.

For many around Boston, his portrait of the city in “At Dusk (Boston Common at Twilight)”, carries a special significance. It is a glowing snapshot of city life that uses a variety of interesting techniques to capture the essence of the scene.

Currently on display at the Museum of Fine Arts in Boston, the original is 152.4cm x 106.68cm and, in oil on canvas, illustrates a snowy, sunset city scene with the denizens of the city bustling along Tremont Street. In the foreground, a young child, in the company of a woman, appears to feed the birds.

Hassam creates a fairly broad tonal range within the piece applying both very dark and light values. His creative use of impasto, particularly in the foreground, makes the tracked, snowy surface of the thoroughfare appear unusually realistic.

The scene’s contrasting use of gloomy, neutral colors in the people, the trees, and the buildings, seems to unify them in their darksome portrayal of the long, New England winter months. Still, the scene is not devoid of hope. The pigments Hassam chose to portray the sunlight are starkly at odds with the neutrals of the earth, edifice, and man. They are bright, warm, and almost appear to glow on the canvas. This pleasant, uplifting contrast has inspired viewers for well over a century.

It is also interesting to observe that overall, the painting, though considered a work of art typical of the Impressionism movement, leaves the discerning viewer with a feeling of a Romantic slant. Indeed, though the subject matter is urban, the perspective and celebration of the sun’s natural light would be right at home in a collection highlighting bucolic, Romantic paintings.

It is also interesting to note that while much of the interest in the foreground is focused on the child’s attention to the birds, one of the more prominent figures is a woman. Perhaps Hassam has chosen to highlight her role in the scene as indicative of the growing social autonomy of women in civil society at the end of the 19th century. But this we may not ever know with certainty.

The painting is listed as a gift of Miss Maud E. Appleton and is on display at the Museum of Fine Art in Boston. If you visit and are taken with its charm, there is some good news, despite the fact that you can’t bring the original into your home.

Visit their website today to check out their prints (via the link above). For a few dollars, you can bring home the heart and soul of this landmark work of Impressionism.