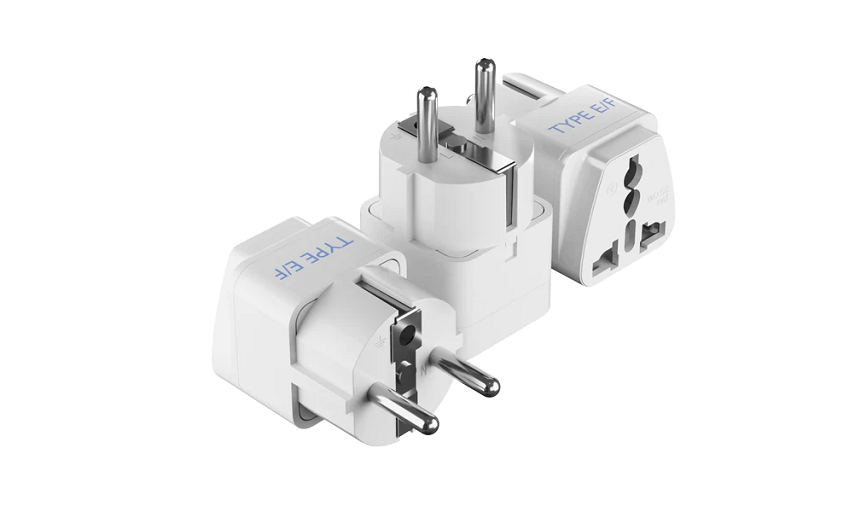 Travel is great. It’s enjoyable, can be relaxing, offers partakers an opportunity to experience other cultures and historical perspectives firsthand, and of course, can be highly educational.

Do you know what isn’t great? Visiting a new country only to find out (too late, mind you) that you can’t charge your electronics because your plugs won’t even fit in the wall outlet!

For that, you’ll need an appropriate Euro adapter plug (also known as a European travel adapter).

Why Do You Need a Euro Adapter Plug in the First Place?
The United States (as well as Canada and Mexico) use two different types of outlets, for the most part.

These are called Type A (two-pronged) and Type B (three-pronged) electrical outlets. Travelers between these three countries rarely need to use outlet adapters or voltage converters, if ever.

However, most of the rest of the world does not use these types of outlets, and there are many other styles of electrical outlets common around the world, particularly in Europe.

If you’re headed across the pond, you’ll want to make sure you have a European plug adapter that is compatible with the four styles mentioned below.

In addition to Type G outlets being used in Ireland and the United Kingdom (Scotland, Northern Ireland, the Isle of Man, England, and Wales), they are also used in Gibraltar, Malta, the Channel Islands, and Cyprus.

European Outlet Adapters for (Most of) the Rest of Continental Europe
There are three other styles of outlets that are commonly used throughout the rest of Europe. These are Types C, E, and F.

Type C electrical outlets have two round prongs and are widely used throughout Europe, though they are also used in many countries in Asia and South America.

Type E and F outlets, which also have two round prongs, are commonly used throughout Europe as well. They are commonly encountered in Russia, France, Poland, and elsewhere in continental Europe.

If you have a Euro plug adapter compatible with these 4 outlet configurations (C, E, F, and G) then you’ll be able to use your electronics in upwards of 50 countries around the world. In fact, many countries in Asia, Africa, and South America use these outlet styles as well, so it’s great for worldwide, international travel, too.

Where Can You Get a Euro Adapter Plug
Looking for a Euro adapter plug that works with Types C, E, F, and G outlets and which is light, compact and affordable?

It can connect up to 4 devices, is fully grounded, CE-certified, and RoHS compliant, and even features a voltage indicator so you can tell if it’s safe to connect your devices or if you need to use a voltage converter.

What Else You’ll Need with This European Adapter?
The PAK-EU Travel Adapter Kit, though it is highly useful for American travelers to Europe, does not come with a voltage converter.

In Europe, 220V service is the standard, whereas in America it is 110V. Charging most 110V appliances or devices in a 220V outlet can burn out the sensitive internal components. The PAK-EU Adapter Kit does have an indicator so you can tell what voltage you’re working with, but it does not have a voltage converter, so you probably need to consider buying one before traveling. Find out more about voltage converters here.