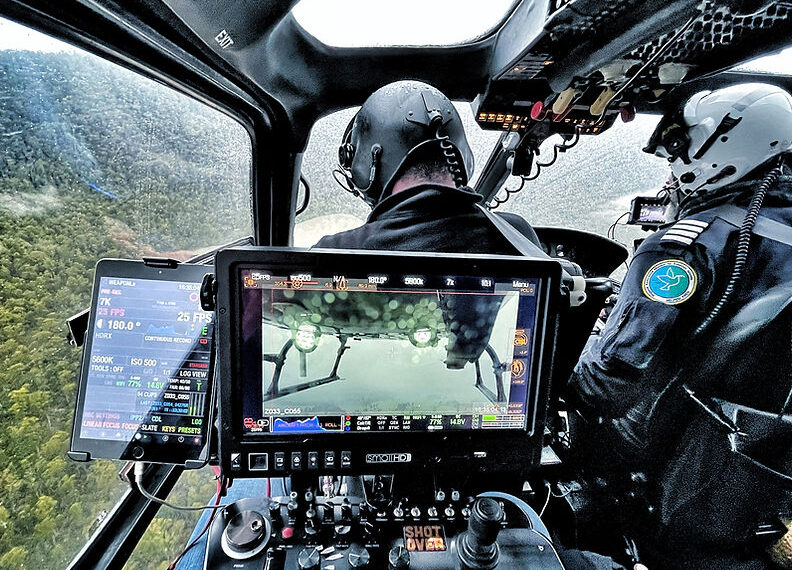 Whether it is a low or big-budget project, the director and the team handling the aerial helicopter filming must communicate well. The film crew needs to understand what they will be doing up in the air, and know what the director’s vision for the shot is. This is essential for ensuring that not only time but money is also saved in an efficient shoot with no need for retakes. If this is your first time working with an aerial filming company, know that there are several things the ground crew can do to make it easier for everyone:

An aerial shoot requires a lot of hard work from the film team and everyone working down on the ground, so, it’s extremely important to take time to do sufficient pre-planning. For your aerial shot to be worth the effort, there should be a reason behind the decision to use one, it should add meaning or subtext to the story you are telling. It’s also essential that you have a vision for how you want the final shot to look in the film so you can give the flight team direction.

There are also important administration details to handle beforehand including the discussion of costs and arranging a time for the flight crew to be at the set, along with whatever safety training may need to be completed for the ground team. So be sure to leave enough time for all the pre-planning.

Since there is little to no way for you to control the lighting from in the air, the position of the sun plays a very important role. You and the flight crew will need to figure out the perfect time to shoot the scenes based on your vision and the mood you are trying to capture.

You will need to work out where they will be shooting, and the number of shots they’ll need to capture in a day as well, remember that you only have a certain time of day with the correct lighting. Try to keep an eye on the weather forecast as well, because weather changes will completely change the aesthetic of the scene. Members of the aerial filming company will likely have insight on when the best time will be to film based on your vision, so be sure to consult them.

Rehearsal should already be a natural part of the filming process, but when involving aerial cinematography, it’s even more important. Operating a camera for aerial shots is a specialized and expensive job, the more takes that need to be filmed, the more expensive and time-consuming the shot will become. A rehearsal will help the filmmaker, cinematographer as well as camera operator gain confidence with what they are filming and where, it will also give them a chance to understand the exact movement of any actors who may be included in the shot. Rehearsals will ensure that all the pieces are in place.

A key part of capturing your vision for the shoot comes in the form of the hardware. This, of course, is the camera. Depending on which aerial filming company you choose, they might have their selection of cameras available for you, most will offer the basics such as DSLRs like Sony, Nikon, and Canon to high-end ones such as RED. It will depend on your budget which camera you can rent for the filming, and how crucial the aerial shot is to your story. It’s also going to depend on what kind of shot you are looking for, once again, the flight team may even be able to recommend a camera for the kind of shot you are interested in.

Finally, aerial filming can be a lengthy process, and the last thing you want is for the camera crew to run out of battery or space on their memory cards while in the air. They should be able to provide their batteries and cards, but there is no harm in providing extra to ensure that nothing will go wrong. An ample number of cards and batteries will always help execute the shoot without stress.

In the modern film industry, the role of aerial cinematography is no longer limited to filler or B rolls. They are now used to capture emotion and feeling in the viewer. It can be used to show how small the protagonist is in a large world, to capture the layout of a city showing views of the square city blocks from high. How the shots are used in context can have completely different emotional weight. Aerial cinematography is the crux of some of the most beautiful, notable scenes in film. So when you are planning to use one of these shots, get in contact with an aerial helicopter filming crew to learn more about how you can make it a reality.